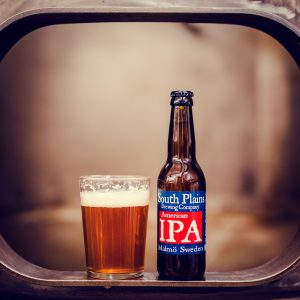 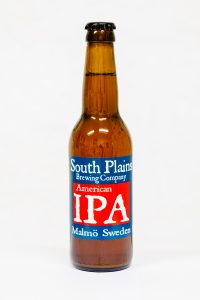 The India Pale Ale was our first beer on the market in 2012.  The recipe is based on a California style India Pale Ale. Each bottle is labeled with the batch # near the expiration date. This is our best selling beer.

*Historical note*. In the 1700’s England would sail clippers on a voyage to their colony of India. But the casks of beer couldn’t make the four month voyage without going sour. So they developed a style where they increased hop bitterness , and they didn’t know it then, but they had decreased the pH making it less likely bacteria could grow. And by increasing alcohol also created a toxic environment for bacteria and this beer became known as ‘India Pale Ale’ and is still served in India & England today. Then in the 1970’s, American craft brewers made a American version of the IPA with new hybrid hops giving unique bitterness & aromas, and a new technique, the ‘Dry Hop’. After the beer has finished fermenting, they would toss on these new hybrid hops to give a intense aroma. When we first brewed this beer in 2013, most Swedish brewers were only doing the English style, and a American IPA was quite unusual.